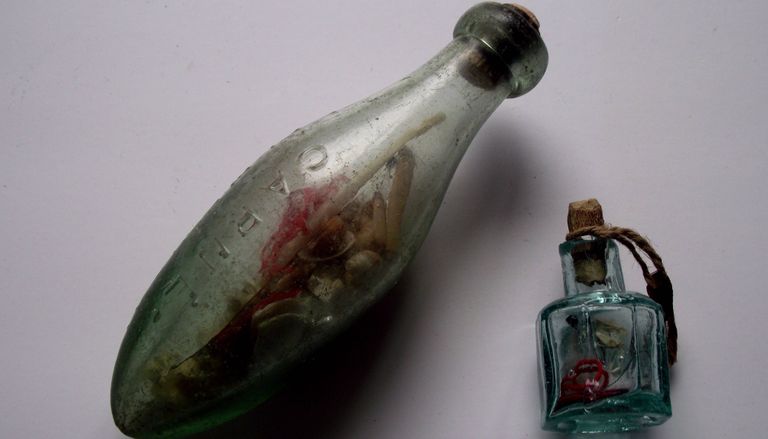 At the site of a one-time pub in the English town of Watford, a group of workers are in the middle of dismantling a chimney. But as they undertake the task, they stumble across something strange. It’s just an old bottle, but one that’s filled with some bizarre and truly eerie things.

This Watford building, it’s been reported, was where one Angeline Tubbs came into the world in 1761. For those who don’t know, Tubbs would later be more widely known by another title: The Witch of Saratoga. As a teenager, Tubbs moved to Saratoga Springs in New York. Here, she started to read people’s fortunes – and became known as a witch.

So, when the workers at Tubbs’ place of birth found a bottle containing teeth, fishhooks and an unknown liquid, it may have seemed like it was linked to her. However, it was later found that the bottle itself was made in the 1830s. As such, Tubbs is unlikely to have had anything to do with it. But whoever did fill and place it in the chimney was nonetheless potentially seeking to protect themselves from occult forces.

Apparently, this bottle is just one of over 100 which have been found throughout Britain. Many of these, it’s been estimated, date back to the 1600s. This was a period in which many Europeans were particularly worried about witchcraft. In response, they sought protection with bottles filled with strange things, like pins and urine. The liquid waste, it was believed, would attract the witches inside the bottle, wherein they’d be caught up by the pins.

Witch bottles such as the one found in Watford are now a source of academic inquiry. In fact, a project known as “Witch Bottles Concealed and Revealed” and run by the Museum of London Archaeology is presently seeking to learn more. But as for the Watford bottle specifically, this will remain hidden. The owner of the property where it was found has said they’ll conceal it once again. Ultimately, it’s probable that it will be uncovered by another unsuspecting person many years hence.