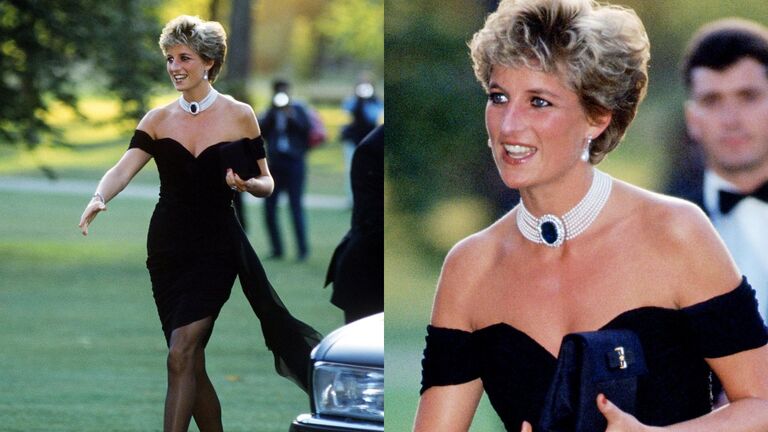 “Revenge is chic” — that was the headline the morning after Princess Diana debuted her iconic little black dress. It was in June 1994, and Diana had set out to make a bold statement to her estranged husband, Charles. And boy, did it work! Now, 28 years later, people are once again talking about Diana’s incredible “Revenge Dress” thanks to its appearance in season five of The Crown. The transgressive LDB has certainly lost none of its power — and we hate to think what King Charles makes of it all.

It’s very rare — even today — to see a member of the royal family wearing a black garment. Amy Roberts, the costume designer for The Crown, spoke to Vanity Fair about the dress in October 2022. “Royalty aren’t really ever encouraged to wear black,” she said. “It’s considered funereal.” But that wasn’t the only reason the Revenge Dress turned heads. “The dress is very décolleté—bare shoulders. It was a sensation,” Roberts explained.

Getting her own back

The sentiment behind wearing the dress also struck a chord with the public. Roberts said, “Every woman must feel [that way if they were in that position]: ‘Hey, you betrayed me. Up yours.’ And I think everybody went, ‘Yes, good for you.’ You can survive and look absolutely sensational.” So much so that when Roberts recreated the dress for actress Elizabeth Debicki in The Crown, it was equally eye-catching.

A showstopper 28 years on

“Elizabeth got out of the car and there was a palpable ‘wowza’ moment on set, like when Emma Corrin was revealed in her wedding dress,” Roberts said. “Film sets are noisy and there’s lots of tinkering going on but nobody had to say, ‘Right, quiet, action.’ Everybody just went quiet on both occasions. It shows you how important those two dresses are.” So Roberts and her team had to work hard to get it right.

The problem they had was that Princess Diana “had a very gym-toned body,” according to Roberts. And because Debicki — who will play Diana between the years of 1991 and 1997 — is more than three inches taller than her real-life counterpart, that meant her body is very different. “So [the Revenge Dress] was made to fit Elizabeth,” Roberts explained. But the likeness is so close that it obviously still had the same impact.