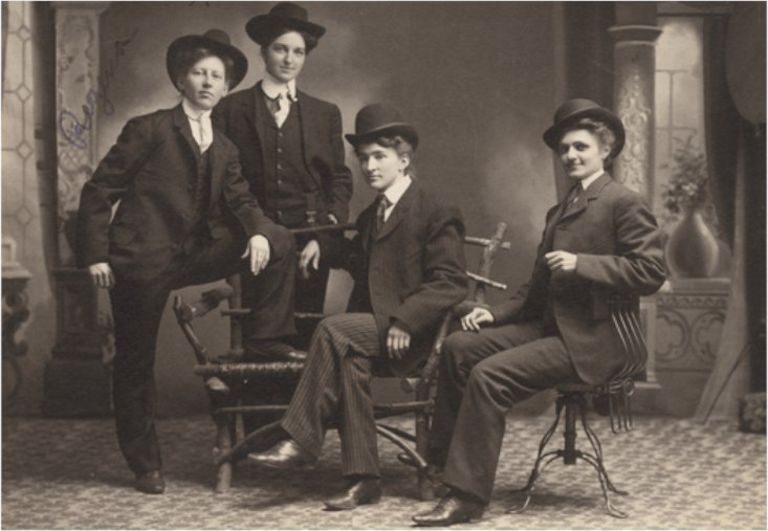 Swinging saloon doors. Boots clacking on a hardwood floor. Guns smoking after an intense duel. We often think of the Wild West this way — lawless, dangerous, and exciting. But what’s not so well reflected in pop films and literature is that the Wild West had a sizeable LGBTQ+ community, too. And surprisingly, many of these people lived out their lives more openly than their fellow Americans in the east. From One-Eyed Charley to Harry Allen and Alice Baker, the hidden histories of these icons cast a whole new light on the era.

So why are we re-hashing an era that's already so widely documented? Well, a scholar has dug up evidence that proves the Wild West wasn't actually quite the way most people think of it — at least in terms of people and their sexual preferences, that is. In fact, the American frontier set the scene for gender-non-conformists to live as themselves. And it wasn’t just a handful of people living this way, either — records document “hundreds.” Even more surprisingly, the historian doing the digging claims that homosexuality amongst cowboys did little to offend anyone, either.

The records were skewed

It seems that the common persona of male cowboys as a rough-and-ready ragtag bunch that has come to represent the Old West may be somewhat skewed. Instead, LGBTQ+ people of the era apparently lived their lives more freely than we previously could have imagined. And, while movies like Brokeback Mountain introduced us to a pair of lovelorn cowboys, that story stems from recent times. So, it’s time to uncover the truth about the real Wild West.

The American frontier opened up at the beginning of the 17th century as English colonizers headed west. And President Thomas Jefferson further encouraged such a migration with the Louisiana Purchase in 1803. Buying a huge swath of land from the French for $15 million gave new confidence to U.S. citizens. By the 20th century, this area and places further west, however, became part of the United States. But a particular stretch of the country earned a reputation all of its own.

From the 19th century to the early 1900s, it wasn’t just the west — it was the Wild West. With the media often exaggerating the antics of the area at the time with accounts ranging from gunfights and robberies to no-holds-barred romance, it's little wonder we think of the American frontier as a land of lawlessness. And even amongst all of these fantastical stories, a historian has discovered that some, truer ones, have been left out altogether.