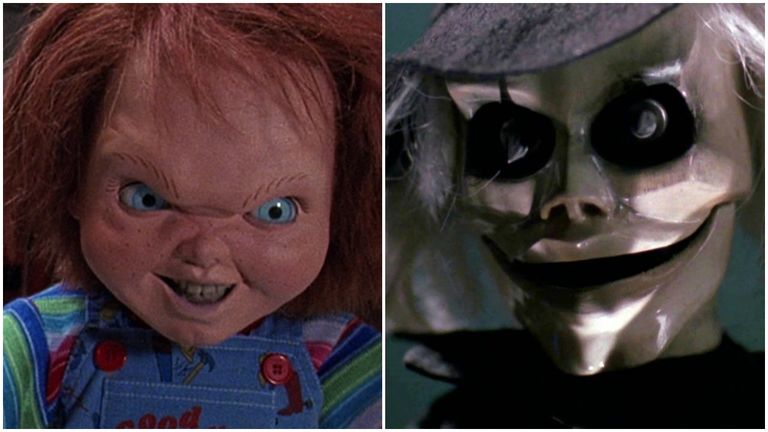 With all the terrifying dolls that have haunted our screens over the years, you’d think parents would know better than to keep buying them for their kids. But then again, Barbie isn’t quite as threatening as the psychopathic playthings that menace and murder in our favorite horror movies. The following 20 big-screen dolls are all twisted enough to fuel your nightmares for weeks on end this spooky season.

Never trust a ventriloquist’s dummy. Not only are those yapping mouths and intense eyes pretty darn creepy, but there’s also a good chance it’s haunted — if 2007’s Dead Silence is anything to go by. This movie’s demonic doll Billy has a penchant for cutting out tongues as penance. And if that doesn’t keep you up at night, nothing will.

1975's cult horror anthology Trilogy of Terror isn’t winning any awards for subtlety. But that doesn't stop its Zuni fetish doll from being truly terrifying. Like a rabid ferret, this creepy thing scurries around after star Karen Black with its teeth bared, looking to shred her with any sharp instrument at its disposal. No thank you!

Okay, so technically this doll never made it into the Twilight movie franchise. In fact, it was so creepy that it was cut from the final version of Breaking Dawn – Part 2. Known as "Chuckesmee," this unnerving animatronic puppet was originally going to portray Bella and Edward’s human-vampire baby Renesmee. But after freaking out the cast and crew, she was axed and now lives on only in the DVD extras. Director Bill Condon told Entertainment Weekly in 2012, "Truly, it was one of the most grotesque things I've ever seen. It was a horror show!"

As evil dolls with actual personalities go, Tina from the 1991 horror Dolly Dearest is right up there with Chucky. Possibly because she’s possessed by a demonic Mayan spirit, Tina’s face gets more and more contorted and creepy as the film goes on. Dolly Dearest is surprisingly watchable for a straight-to-video movie — but only if you can stomach Tina’s knife-wielding antics. Good luck!